The Axial SCX-6 has impressed me much more than anticipated, and after some basic tuning to the shocks and link locations to improve its overall crawling performance, it had become one of my most favored crawlers in the fleet.  The only thing I lamented were the limited body options for this crawler.

By the time Rich’s email arrived, I had already been testing a few different tires out on the trail, and while nothing was really blowing our skirts up, they all seemed to be doing reasonably well.  The heavy weight of the SCX-6 plays a significant role in tire performance in that the crawler’s weight drives the tire’s lugs firmly into the rock surface, providing good traction with just about any quality tire.  It’s one of the first things I noticed about the stock BFG tires; they crawl pretty darn well.

That said, it’s when the trail turns steep that the BFG tire struggles with traction.  It’s also important to stress that the factory setup of the SCX-6 contributes some to the limited traction on steep ascents.  I've written about this in more detail on the SCX-6 page, but the short version is that we adjusted our SCX-6 linkage and suspension, as well as weight distribution for maximum crawling performance out on the trail.
The soft green rubber compound is pliable and molds to the minute cracks and voids in the rock’s surface.  This is complimented by the Landmine's squared lugs hooking into the rock’s imperfections.  I've seen this same traction from the their 1.9 and 2.2 Rupture tires, and these made from an identical rubber compound, and I consider the Ruptures to be unsurpassed in crawling performance outside of specially made comp crawling tires.

Surprisingly the SCX-6 easily climbed to the top of Waterfall with no real struggle or any difficulty to note.  There was plenty of groaning from the tires working under the SCX-6’s weight, but they remained firmly mounted to the plastic beadlock wheels.

We worked on a few more unique spots of the trail that following weekend, crawling up and down various rocks and outcroppings with the same results; excellent traction with over-matched foams.  It was time to do something about the foam situation, and we knew just where to start.
Two weeks later a box arrived with a custom set of foams what were based on the 2.2 tire widths, but with a properly machined 2.9” closed-cell inner foam and a 7” tall open-cell firm outer foam.  Unfortunately, they were a bit narrow and moved too much from side to side in the tire.   To solve this, I grabbed a set of the OEM foams from Axial and to the best of my ability, carefully sliced off ¼” thick discs.
Devil in the Details

Slowly but surely the SCX-6 continued to climb the rock, and in the photo above you can see the passenger's rear tire knotting up around the rock for a firm hold.  Also note that the CI close-cell inner foam is preventing the tire from crushing down to the wheel.  Keep the tire centered on the wheel is where the foam sidewall discs come into play, complimenting the closed-cell inner foam for complete tire support, but that's not the whole story here.

Notice the passenger's front tire and how there is still some flexing of the sidewall as the Landmine tire conforms to the rock, yet there is only minimal weight on that tire; this is where a proper foam set up paired with a premium crawling tire really shines and the crawling magic happens.  Front tire traction, link position, suspension setup, and weight distribution all contribute to crawling performance.  If your front tires are not conforming to the rock's surface on steep climbs, you need to address items listed in bold above; crawling performance not just about the tire.  As good as the tire may be, foams, links, suspension, and weight distribution errors will negate any performance gains a good tire can provide.
Nearing the top of the rock, the angle steepened a bit more with the driver’s side tire complete lifting away from the surface.  We had dialed in the link setup on the SCX-6 to have just the right amount of anti-squat to keep the front tires planted on steep lines, but this line really had the truck in a tough spot.  Impressively, the rear tires continued to hold firm, and the front passenger tire had just enough traction to maintain control over the front.

Up we continued and once the top of the rock was reached and the tires started to break over the summit, the SCX-6’s front tires dropped down and pulled crawler’s weight down over to the front axle, and we were on top.  I was impressed because we had attempted this wall a number of times before with a pair of SCX-6 but had never made it to the top.  It just shows that with proper link setup paired with good tires and foams will take the SCX-6 to the next level of crawling.

We knocked off a few more steep rock faces with similar results, but now it was time to cruise on over to El Arbol Perdido trail and really put these tires to the test.
I also I think it’s a good idea that JConcepts included wheels with the Landmines.  This way you can switch tires without changing wheels.
Specs 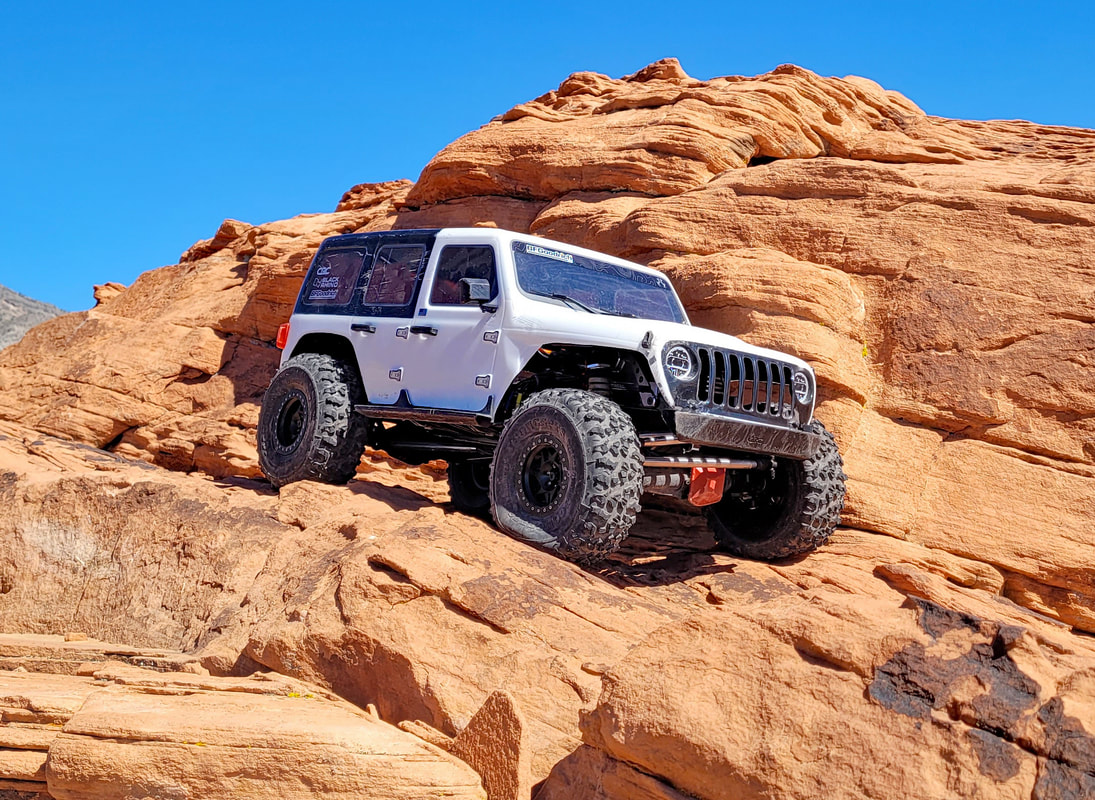