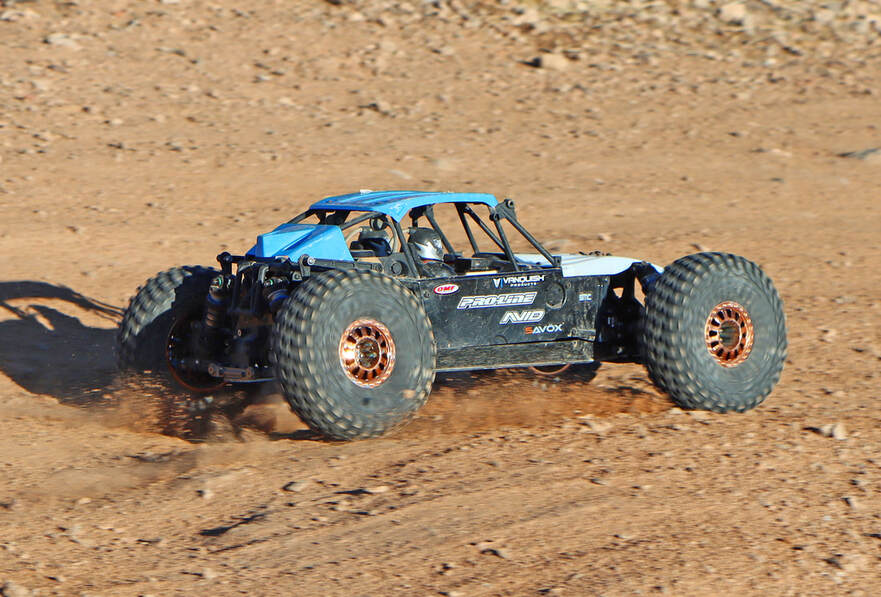 Losi Lasernut U4 on the desert track.
Rolling out from the pits, I eased the Lasernut into the first turn at 50% power, looking to see how much the buggy would lean to the side with these massive BFG tires.

The damp surface of the track was tacky and the side cleats of the BFG’s hooked in nicely, carving a smooth line around the outside edge of the turn.

The heavy sidewalls of the tires and large cleats prevented the tire from leaning too far over, but you could easily see the tilt in corners.  Two degrees of negative camber looked to be the right setup for the tires.

There was enough sidewall traction from the cleats that in some corners where the soil was still damp from the morning watering, the Lasernut would really dig in the outside tire and want to roll over.  I had to come off the throttle a bit earlier and enter the corner with less speed, then accelerate at the apex and allow the Lasernut to power out of the exit, rather than hold the throttle all the way though.

The aggressive tread pattern of the BFG’s was clearly handling the tricky surface conditions of our desert track. 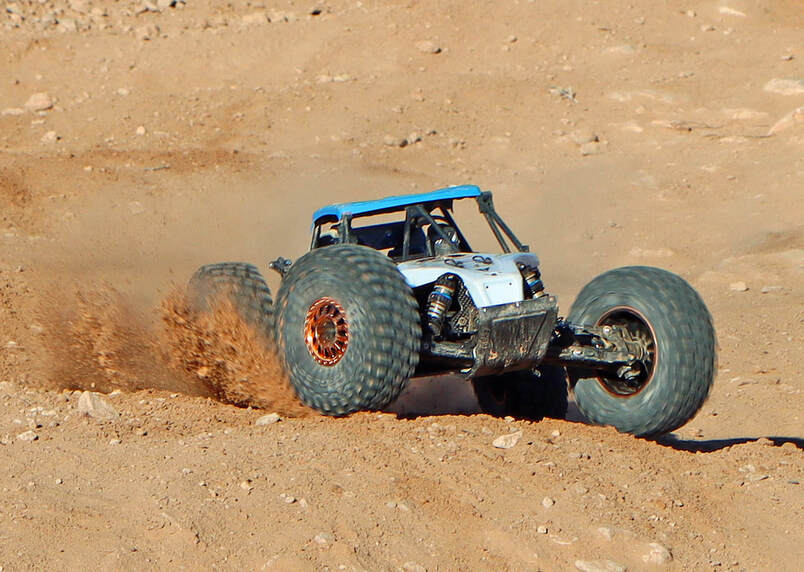 Lasernut's BFG tires provided excellent traction.
Working the first series of laps, the BFG tires did an excellent job of keeping a good grip on the track and managing the loose rock around the corners and edges.

I felt almost no slippage when blasting over the chunky rocks littering the track, and the deeper ruts didn’t shake the tires free.

In tight corners where hard braking was necessary, the BFG tires dug in deep and had very little understeer into the corner.  Usually after a hard breaking corner, I would quickly ramp up the throttle, launching the Lasernut out with little speed loss to wheel spin.

This traction allowed me to brake latter into the corner and exit at a higher speed, consistently shaving seconds off the lap times.

Ultimately, I spent less time in the corner at slower speeds as long as I didn’t come in too fast and flip the Lasernut trying to make the turn.  As the track dried out, I was able to take the corners faster. 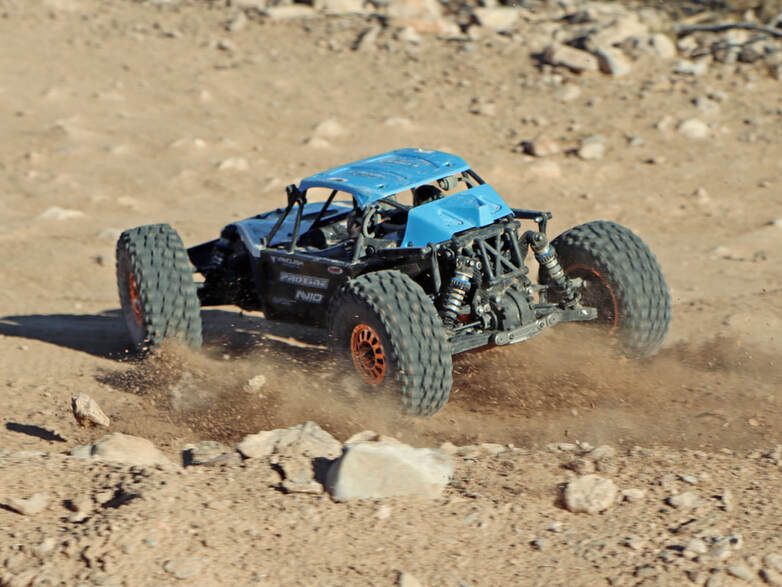 Lasernut running down another quick lap time.
After a number of laps, the track was drying out quickly and pockets of deep, fine dusty soil were starting to spread out.

These can act like quicksand, slowing the buggy down as you try to navigate your way through to the other side.

Most drivers will react to these sections by punching the throttle, but often you end up spinning all four tires until one of the tires hooks into something solid.

The BFG’s wide footprint and large cleats have a big advantage here, pulling the Lasernut across the loose dirt as if they were a series of small paddles.

At the end of the first battery, the track was relatively dry and loose rock was strewn across some of the deeper ruts.  While swapping batteries, I could already see small chips taken out of the wheel’s glossy metallic paint from rock strikes, but the tires had little more than a light dusting of soil. 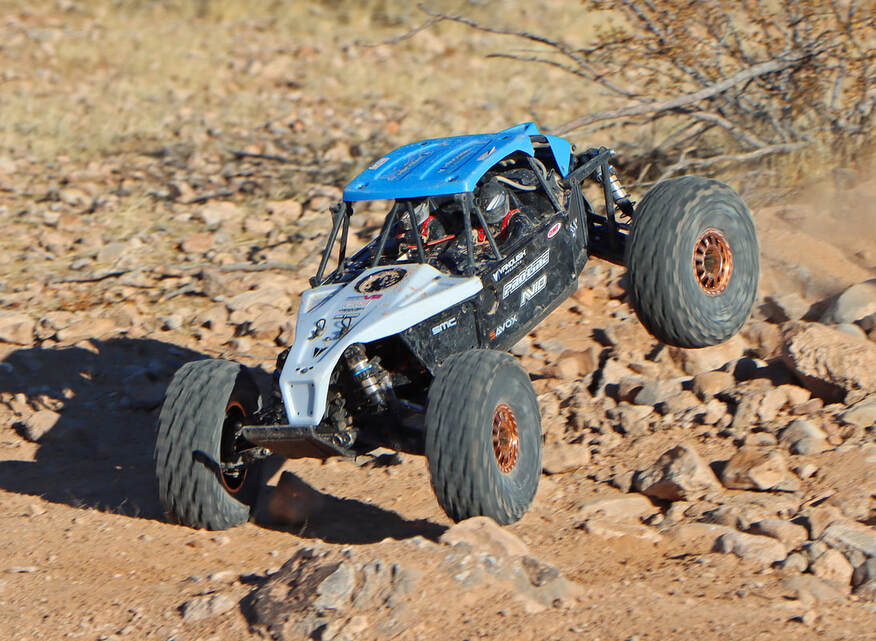 The Lasernut's wheels and tires were subjected to intense abuse on the track.
Nearing the end of the last battery for the track session, the Lasernut continued to run fast laps with consistent times only floating by a few seconds.

While the track is short with an average lap time of 30 seconds, there are so many tricky lines and terrain features that bogging down or running offline can quickly add ten seconds to a lap.

Interesting the BFG tires demonstrated a consistent level of traction throughout all the areas on the track, easily making up for bad line choice.

Sometimes you catch a rock strike on the bottom of the chassis that will pop you off course in a strange direction, landing you off in the rocks on the side of the track.  The large tire cleats and pliable sidewalls would grab hold of these rocks, and with a simple blip of the throttle, I would be right back on the track.  I didn’t experience a single time where I could not crawl my way out of the larger side rocks on the berms. 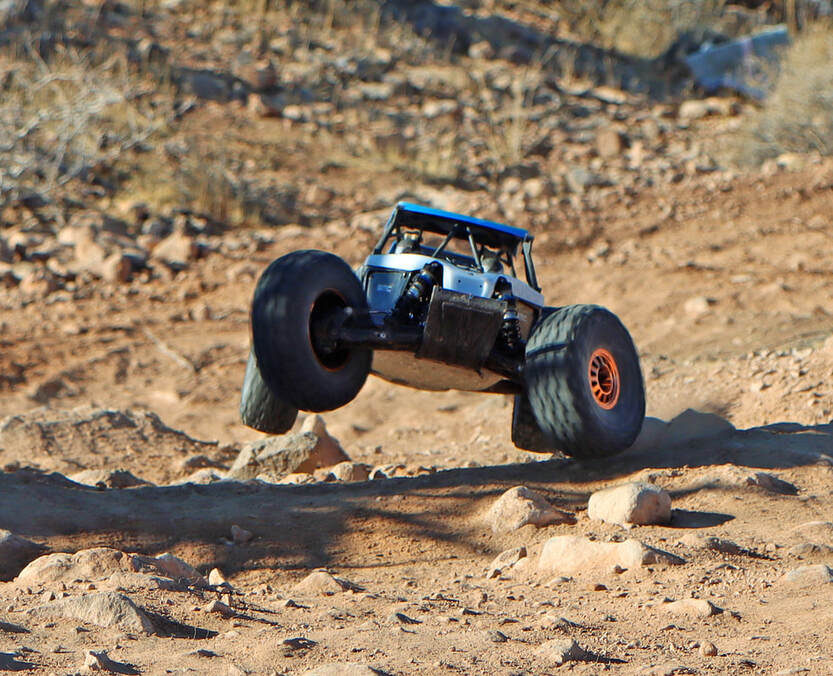 Lasernut up and over another rock garden.
Back out on the track a few days later, the surface had been watered the night before to a point where it was tacky enough for the dirt to clump and stick to your shoes, but not enough to cake like mud.

That morning, we started early with Lasernut, looking to get a number of laps in before the sun started to dry out the track’s surface.

The first dozen or so laps needed a much sharper eye on the corners and ruts, and an overall finer level of control.

The BFG sidewall cleats would dig sharply into the tacky dirt and flip the usually stable Lasernut onto its side.  To help mitigate this, I lowered the ride height by 5mm and took a bit of speed off when entering the corners.

A few times when tumbling off the track after getting fouled up in a rut, the Lasernut would smash one of the tires into a large rock and you could hear the plastic wheel take a hit.  At one point I thought for sure the wheels cracked, but after a close inspection I could find no damage.

The loose rocks were slowly eating away at the painted finish on the wheels, but overall, they were holding up.  The change to the ride height did help settle things down a bit. 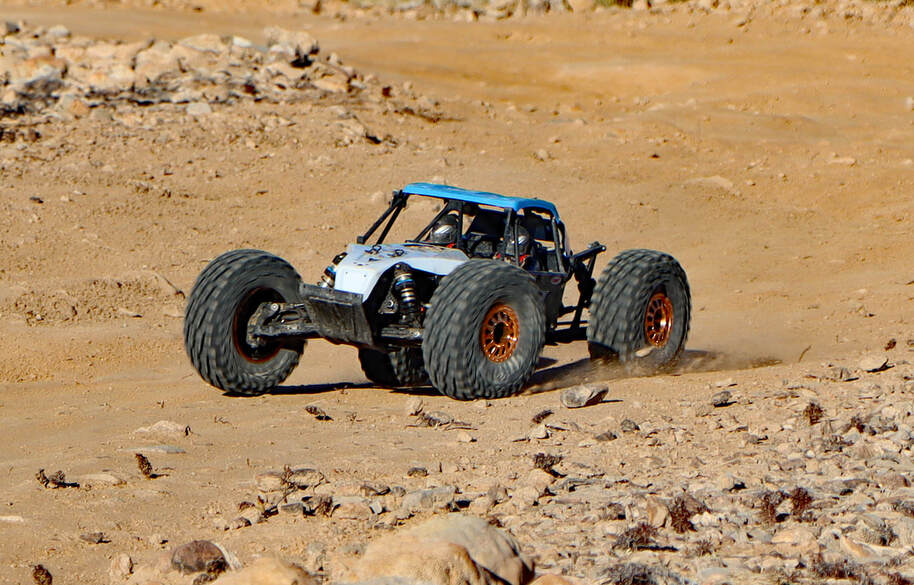 Another fast lap for the Lasernut.
Lap Times

For this section of the review, I selected lap times from four different days of testing.

Each day I would record over 100 laps with the Lasernut, making notes about track conditions and buggy setup.

For every desert track session, I would run 20 laps before I started recording times.  This allowed me to warm up and get a feel of any track changes, such as new rocks on the surface or worsening ruts.

I’d figure out my lines and give them a good number of test runs, then do a light spray of water on the track surface to tack it down, drop in a fresh battery and start recording times.

Throughout this process, there was one clear trend in the times; the BFG tires favor a slightly dry surface with a soft dirt base underneath.  The BFG tires will run a precise line, but with the tacky traction of the surface, I felt that the tires would hang up a bit in the corners, throwing large fantails of dirt but also giving up a bit of speed.  For the wetter surface, the average lap time was 26.5 seconds. 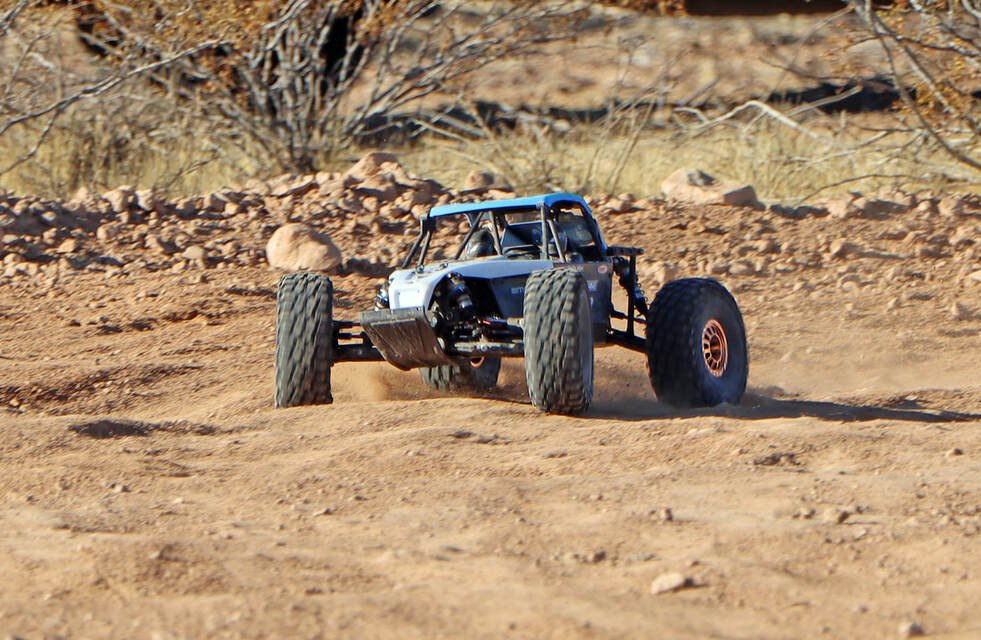 Lasernut tracking perfectly around the corner.
As the track surface dried out, the lap time averages would drop to 24.9 seconds.

This was the fastest the Lasernut would run, with a few lap times in the 23 second range.

The loose surface would allow just enough slip of the side cleats in the corner, allowing a smoother drift over the bumps and ruts.

The still damp layer of soil underneath still provided enough traction for launching forward down the straightaways and out from the corners.

Once enough laps had been run and the track had the chance to dry out, lap times started to climb just a bit to an average of 25.3 seconds.   I didn’t have any times in the 23 second range, but it did feel faster and smoother than the first series of laps. 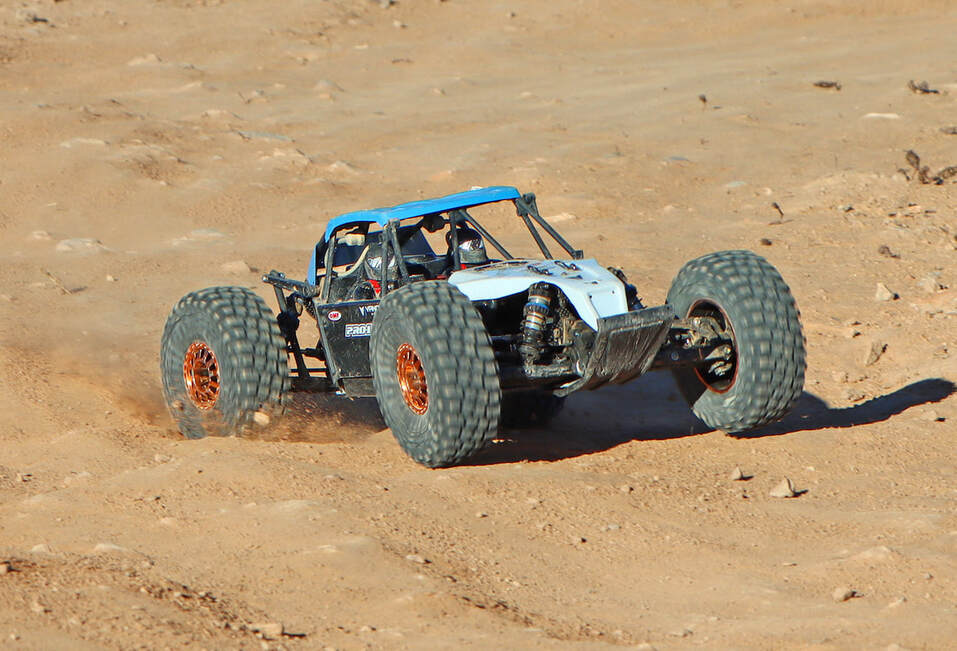 Excellent traction in loose track conditions.
Common lap times on this track run in the 30 second range, with some of the SCT’s really struggling to stay under 40 seconds while fighting their way through the larger rocks and dips on the track.

Seeing the Lasernut running consistently under 30 seconds tells me that the biggest limitation is my driving skill and not the buggy setup or traction.

It is unusual to see such a solid performing wheel and tire combination on an RTR, and I feel you could do well at just about any U4RC event with this setup.  This is one of the few areas on the Lasernut that didn’t need an upgrade. 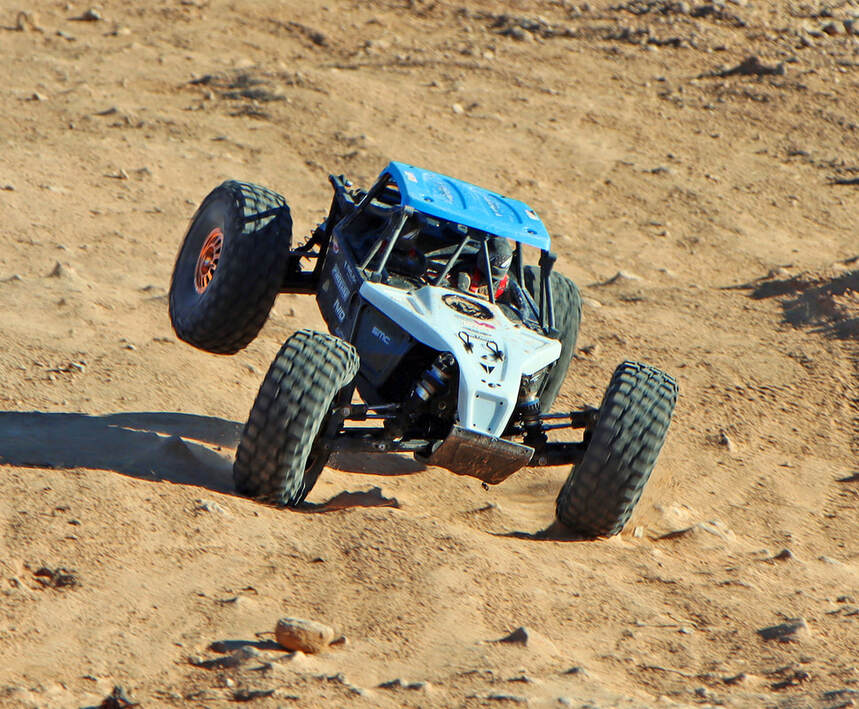 There are two main elements that I consider when looking at a wheel and tire combination: performance and durability.

From the previous text, it’s apparent that the combination is more than capable of excellent performance, but it’s also important to handle lap after lap without failure.

Even aluminum beadlock wheels take a beating on this surface, so I figured it was only going to be a matter of time before one of the wheels cracked or the tire glue started to fail.

Until that failure event surfaced, the plan was to run these wheels and tires hard. 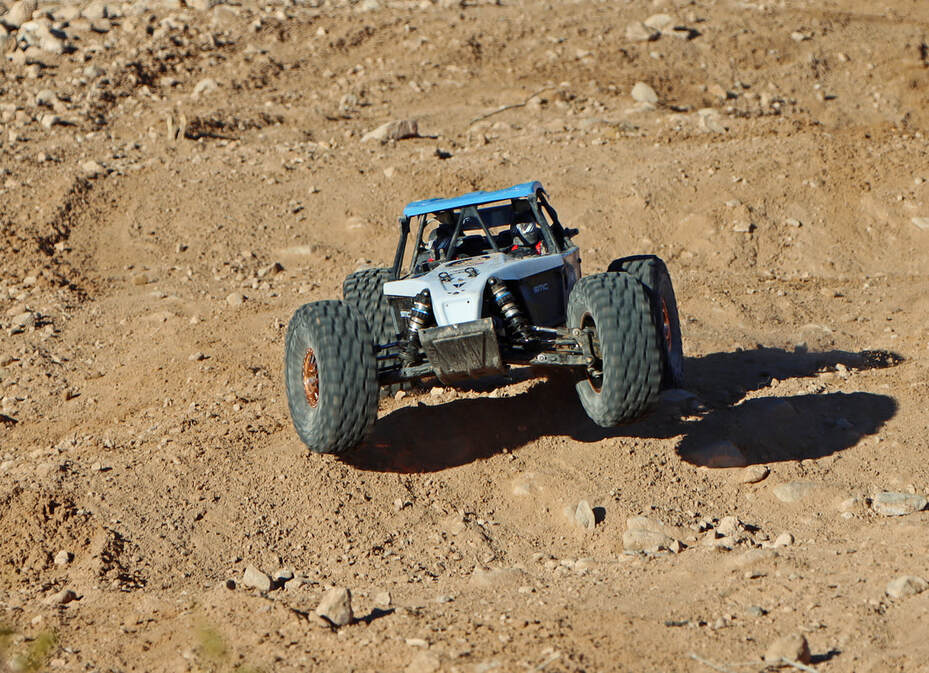 Lasernut negotiating the whoops with precision.
After hundreds of laps, the wheel and tire combination showed no signs of failure.

During maintenance, each wheel was inspected for cracks or failure with the glue bead, and each tire for tears, slashes, and missing cleats.

Interestingly, other than some scrapes and chips taken out of the wheel finish, I found no issues.

The metal wheel hexes were starting to dig into the molded plastic recesses of the wheel, but that’s not terribly shocking considering the stresses placed on that interface by the torque of the motor and the large mass of the tire.

It’s important to keep the wheel nuts tight to prevent any free movement between the wheel and the hex drive nut.

Once the final lap was run and testing complete, the wheels and tires remained 100% sound and ready for more action. 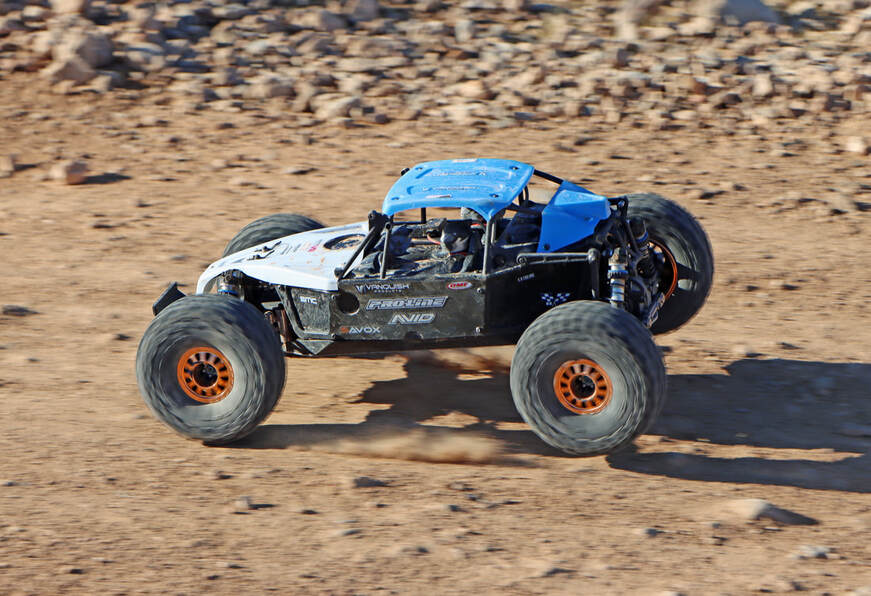 Final laps of the day for the Lasernut.
Conclusion

This wheel and tire combination is quite impressive for an RTR.  The plastic wheels are well made and Losi set them up with a good offset for ideal wheel clearance off the front spindle carrier.

As for the BFG tires, they are excellent in both rubber quality and attention to detail.   While they command a premium price on the market, I feel they are worth the investment – if you want to run a 2.2 / 3.0 wheel.

On the track the BFG tires provided solid traction in a wide range of conditions, slightly favoring a dry surface.

As hard as I ran them over the loose rocks, I was able to avoid any damage to the sidewalls.  There were plenty of witness marks from rocks striking the sides, but the tires didn’t seem to take any damage.   During the entire time of testing, I encountered no problems or failures with the wheel or tire.

The lap times on our desert track were very good, easily placing it in position to win a race on any given day.  They are on the heavy side for a racing setup, but on chunky desert and U4RC tracks, the durability far outweighs any disadvantage by running a little extra weight. 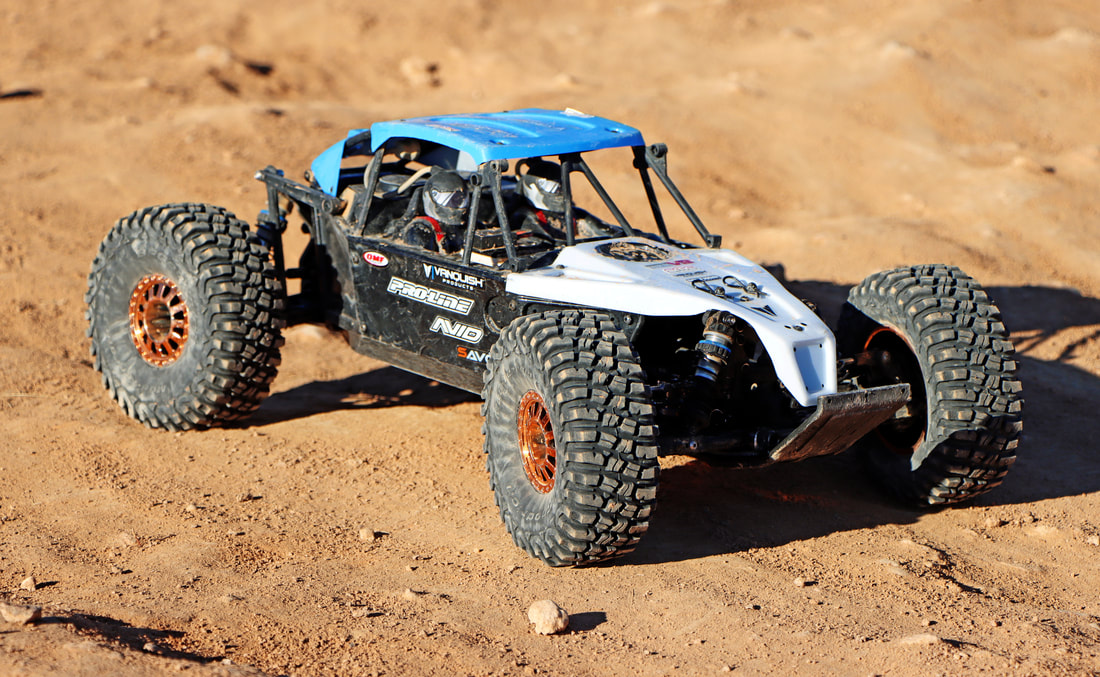 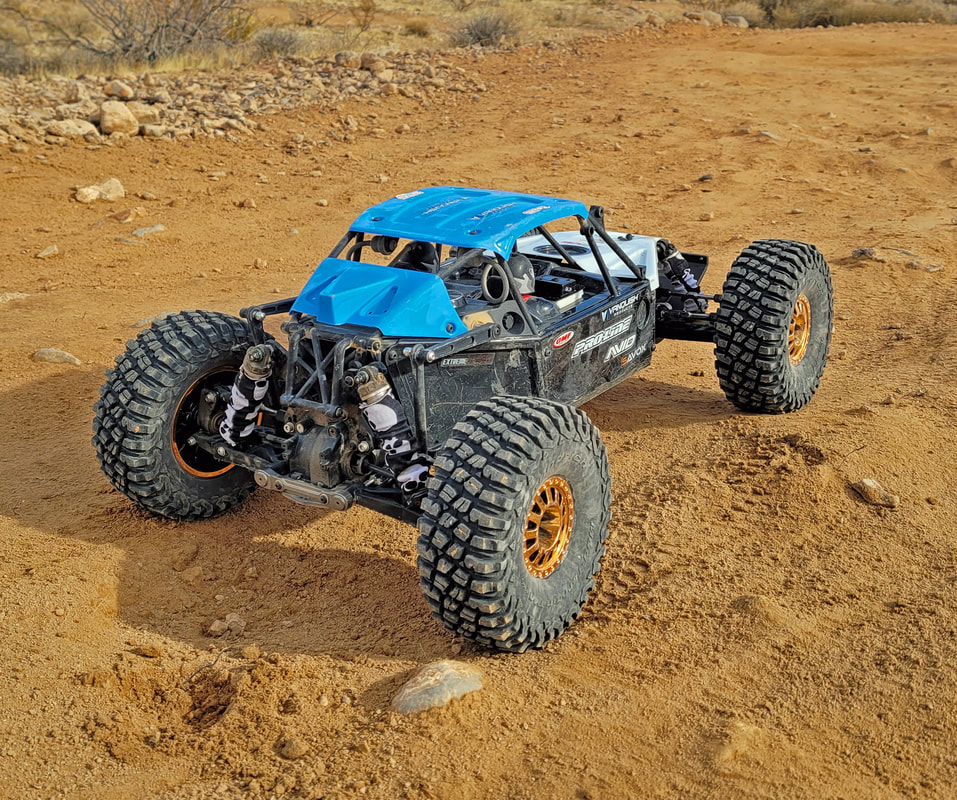 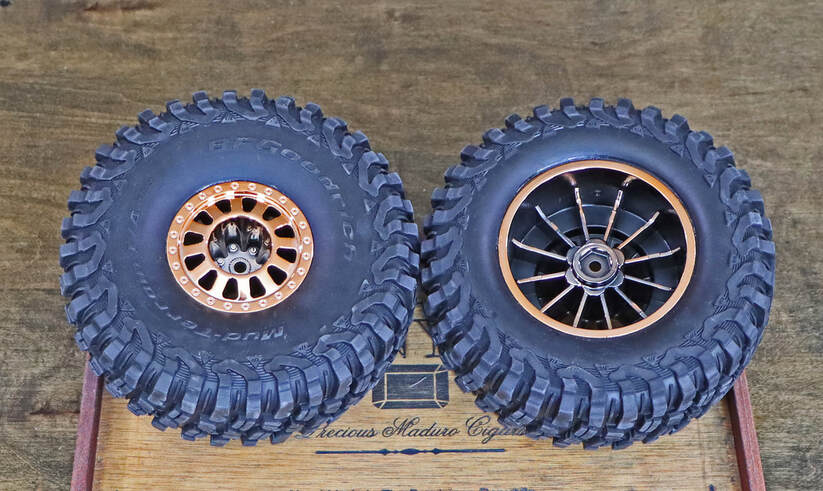