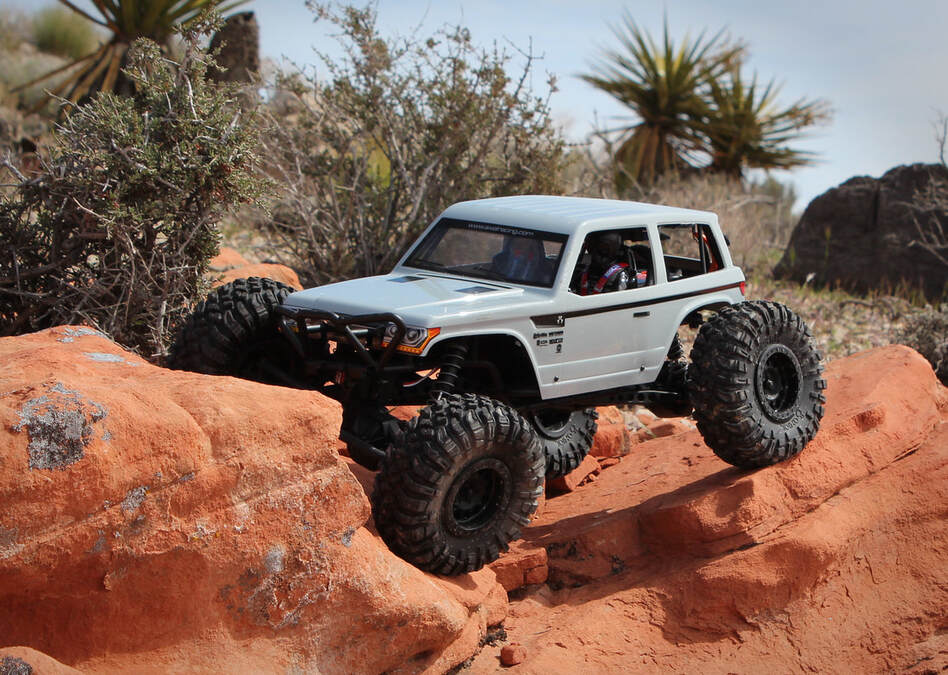 Sutherland Pass is a quiet area nestled away at the base of Big Horn trail, which is an off-roading playground known to a small group of hard-core Jeep, ATV, and pickup truck drivers as the perfect place challenge your skill, snap a U-joint, or fold up a quarter panel.  Depending on the day, you might accomplish all three.

This seemed like a great place to start out with the Wraith, so I charged up the batteries and headed that direction.

You know you've found the right place when the rocks on the trail become scarred with deep groves from frame bites and streaked with black rubber from tires clawing their way up and over.

After working my way up the trail in the Tundra for the better part of an hour, I stopped at a beautiful ribbon of smooth sandstone poking up from the desert floor to start my Wraith's first trail adventure.  I was also anxious to park my full-size truck before things got really nasty on the trail. 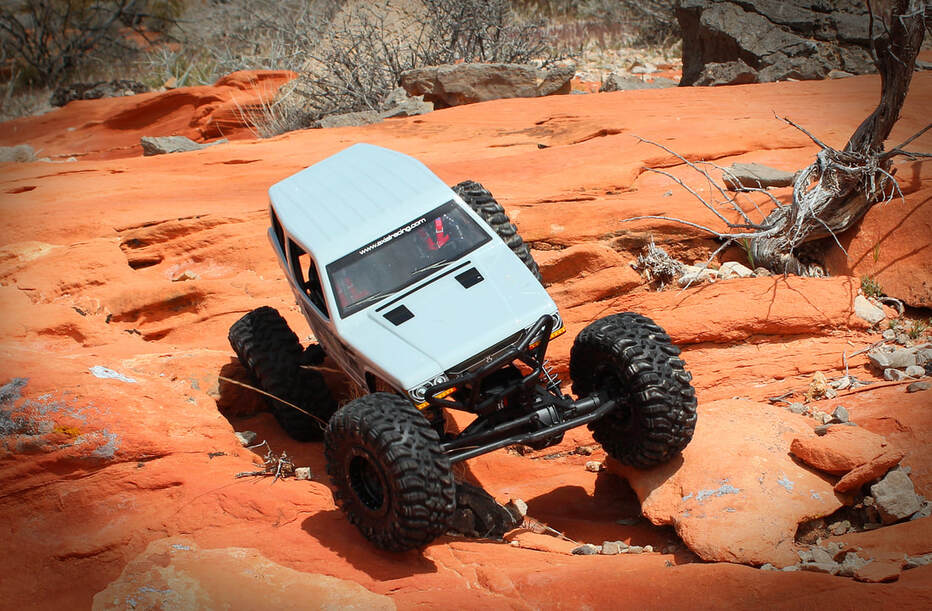 When the elevations changes increased, the tires would groan and grind, but remained tightly wrapped around the sandstone's bright red surface.

There is no question that the sandstone, freshly cleaned by weeks of light rain, was about as good as it gets for crawling surfaces, but that said, the Wraith moved up the sandstone surfaces with stunning ease.  Staying slow and steady kept the truck moving along nicely with what seemed to be a bottomless battery life. 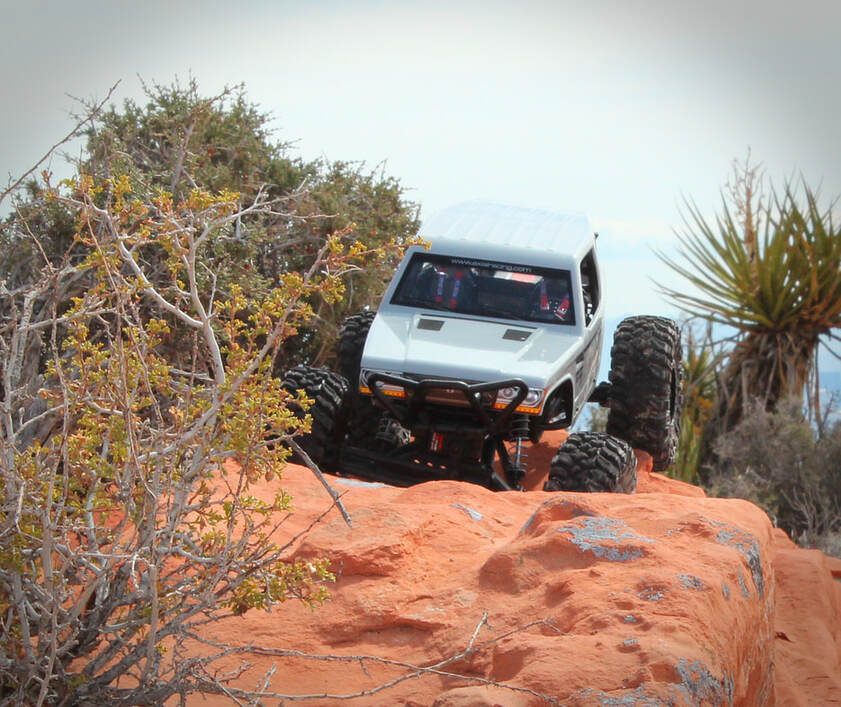 Pushing deeper into less and less friendly terrain, the rocks were becoming larger with more tangled brush along their edges.

While the massive 2.2" Rip Saw tires continued to dominate the rock surfaces, the servo and steering linkages were starting to show their limitations.

I had read on-line that replacing the factory servo is a common "first upgrade" to this unit, but I was determined to stay with the servo until it died of natural causes.

Working around some of the more treacherous lines, the servo was able to keep the tires pointed in the right direction as long as I didn't make hard direction changes without forward movement.

Interestingly, the plastic steering linkage would bend and flex, providing some momentary relief to the servo as it caught up to the direction I was trying to go.  Obviously the engineers at Axial Racing had done their homework by picking materials which would flex and bend, reducing overall strain on the Wraith. 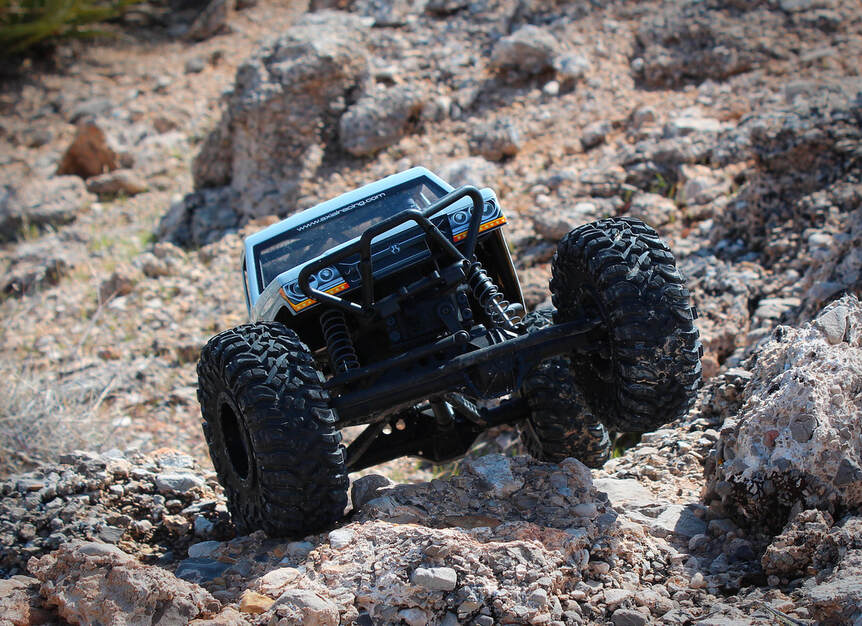 At this point on the trail, things were getting a little more nasty in terms of terrain.

The smooth sandstone had given way to a fused kind amalgam of hard rock and eroding sandstone.  This is a completely different rock type than the sedimentary red sandstone, and in some areas can have quite sharp edges.

This rock type also signals the start of a small and elusive section in this area known as Badlands Ridge.
Sparse vegetation and extreme temperatures makes for some excellent and challenging crawling, but the large rocks and tricky edges are ready to extract a high price for mistakes. 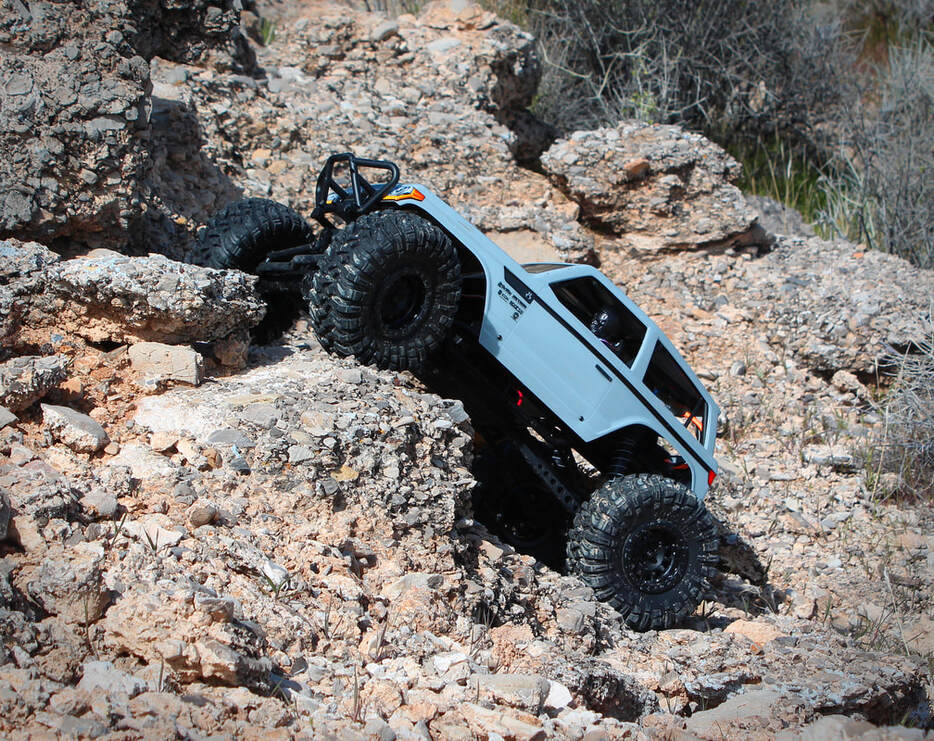 This ridgeline of jagged rock is an excellent test of a tire’s resistance to sidewall tears and a wheel’s beadlock rings.

On the Wraith, the factory Rip Saw tires held up impressively well to even the most gnarled sections of rock.

The factory wheels are molded plastic and have the beadlock ring as part of the wheel, rather than a separate piece.  This wheel design and material makes sense in order to keep the RTR cost down, and in overall performance, they did an excellent job in protecting the inner edge of the tire where it meets the wheel.

After a few solid side-impacts against the rocks, the “new” look was a thing of the past for the Wraith’s wheels and tires, but they continued to get up and over every rock and ledge in its path. 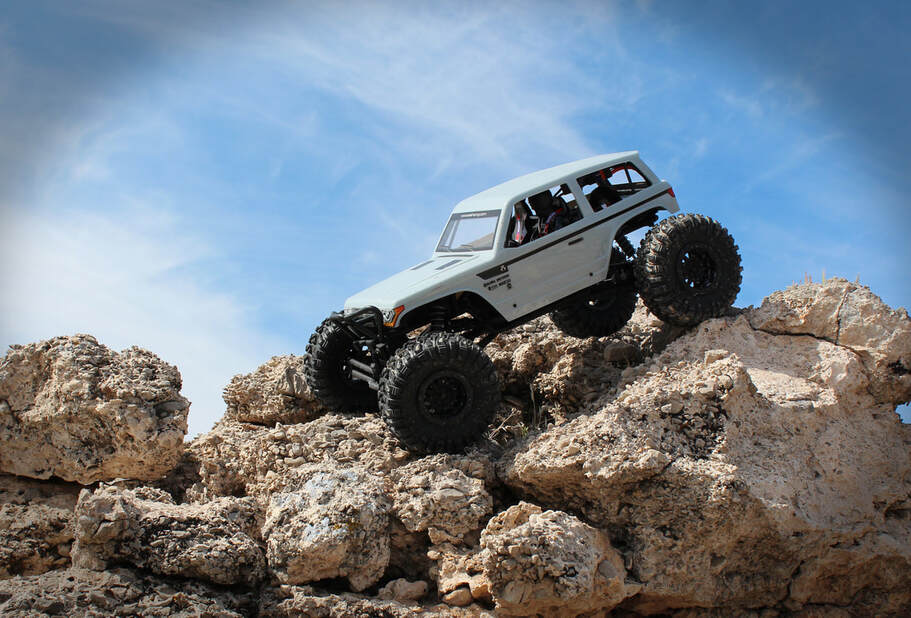 Nearly two hours with the first battery, it was time to swap out and install a fresh Spektrum 2s / 5000 mAH Lipo battery.   These hard case batteries fit snugly into the battery tray in the rear.

This brings up another common issue with RTR crawlers, and that’s battery placement.   For crawling, it’s universally accepted that you want the battery up front, putting more than 50% of the overall weight of the truck on the front half of the vehicle.  Some people try for a 60/40 balance and think that’s about ideal.

On the Wraith, the large Spektrum 2s battery does indeed move the weight to the rear, and also the battery tray sits higher up on the chassis than desired by many crawlers.  For a dedicated rock crawler, it’s not only the weight distribution that matters, but just as much the center of gravity ( COG ) is key for top performance.  You want the weight in the chassis as low as possible; it greatly reduces the chance of tipping over.

While that’s all well established, this layout is so easy to use from the factory that I opted not to make any changes until I developed a solid feel for the Wraith’s actual limitations.  I was reluctant to make changes before I knew what I was actually changing from.  I was also really enjoying the performance on the rocks and didn't have any compelling reason to change anything at the time. 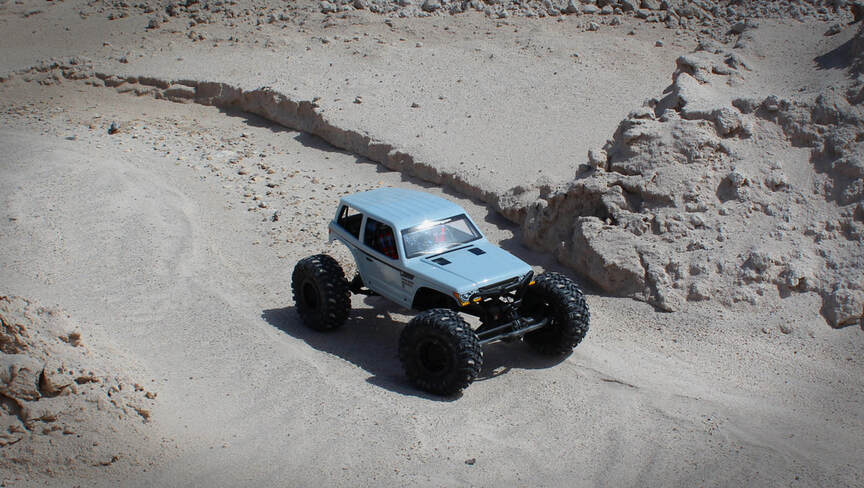 Glancing at my watch, I figured it was time to start looking for a way off the ridge and head back to the truck.

Coming down the other side of the ridge was much less challenging, allowing me to lightly drag on the reverse direction of the transmitter, putting just enough drag onto the engine for the Wraith to delicately pick its descent down the ridge.

After a few more twists and turns, the Wraith found the bottom of the trail at Crescent River wash.  This bone-dry wash, a flowing river long ago, is now home to lizards, snakes, and other desert wildlife.  When the monsoons arrive, this is a pretty wild place with flash flooding, but today the Wraith cruised along the soft, dry sandy bottom making good time back to the truck.

Overall I was immensely pleased with the Wraith.  It exceeded my expectations and kicked off my growing interest in rock crawling.  More to come soon.  Until then, adventure on…